From Warrior Pros to Warrior Pose…

Watch my ABC News interview on meditation-based practices for veterans with PTSD: 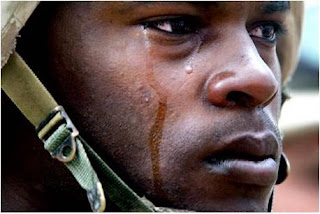 Once thought of as a new age phenomenon in popular US culture, yoga and meditation are rapidly finding their way into the conservative arena of the military:

On the one hand yoga-based interventions are being used to train better soldiers. The army is seriously looking into practices such as yoga, yogic breathing, and meditation to increase the skills of active-duty soldiers. It is funding psychologists at top universities, such as Amishi Jha, to research the effects of meditation on soldier’s attention and cognitive skills. A recent article by Amishi Jha suggests that certain types of meditation, such as mindfulness, can indeed increase attention and focus. Her program also aims at helping soldiers develop mindfulness so that they can better regulate their emotions during stressful situations. A sentence from her abstract in an upcoming article in Military Review summarize her intention to help cultivate mental capacities for decision-making: “Successful counterinsurgency depends not on overwhelming military force to kill every insurgent but rather on individual counterinsurgents’ mental capacities to make decisions that further overarching political objectives.”

A new positive-psychology “mind-training” program is going to be taught to 1.1 million soldiers in the hopes of increasing their emotional resilience, a New York Times article reports. Other similar programs, such as the Samurai Mind-Training program, are helping soldiers increase their performance on the shooting range.There are obvious ethical problems if mind-training skills are taught without an ethical backdrop. Traditionally, all meditation practices were taught within an ethical framework. Training the mind to have sharper shooting skills without providing ethical guidelines is worrisome. However, if these practices help soldiers to regulate their emotions and thereby save lives (e.g. by not shooting at innocent civilians simply because they are in a state of panic), then such practices may be useful.

On the other hand, yoga-based interventions are being used to heal returning veterans. The average age of soldiers returning from war is 25 and yet they have been through unimaginably traumatic experiences. Veterans return with problems ranging from sleep problems to PTSD, uncontrollable rage, and traumatic flashbacks. These circumstances often lead them to personal problems such as divorce and family break-ups leading to increased isolation and depression. Suicides are on the rise both amongst active-duty soldiers and returning veterans. The suicide rate amongst veterans has hit a three-decade high, reported the LA Times. For this reason, a rapidly increasing number of yoga- and meditation-based programs are also being tested with veterans who have just returned from the battlefield and suffer from trauma. Examples of such programs are iRest(a yoga nidra program created by Richard Miller) and Project Welcome Home Troops ( a Sudarshan Kriya – based breathing program offered by the International Association for Human Values). Though military men and women are used to a very “masculine” environment that may make them wary of anything that seems “girly,” the programs are taught skillfully and many veterans report finding great relief from these practices.

Here are links to two articles on my research using meditation-based practices for veterans returning from Iraq & Afghanistan:

From Warrior Pros to Warrior Pose… was last modified: August 11th, 2017 by emmamseppala

Regulation of Emotions through both Body & Mind

7 Science-Based Reasons to Laugh Out Loud Every...

How We Read Each Other’s Minds

A Gift of Loving Kindness Meditation

I forgot to say: thanks for the nice blog by the way! I am sure many people will benefit from it!